GRAMMY-nominated R&B artist Montell Jordan, known for his iconic hit “This is How We Do It” joined Daytime EMMY-nominated comedian Chonda Pierce and World Heavyweight Champion wrestler AJ Styles, to announce the nominees for the 43rd Annual Gospel Music Association Dove Awards in Atlanta. Nineteen-year-old GRAMMY nominee Jamie-Grace, a role model for those struggling with Tourette Syndrome, performed at the event. "I have shoes older than she is," said Pierce, "and that kinda ticks me off."

Christian music mainstay Jason Crabb led the number of GMA DOVE Award nominations today according to the press conference held by the GMA at The Georgian Terrace Hotel in Atlanta, GA. 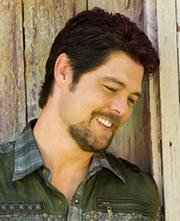 Crabb’s current southern Gospel radio hit “Who Am I,” written by Rusty Goodman and featured on his nominated release The Song Lives On, is also nominated in the Song of the Year category for the 2012 GMA DOVE Awards.

“I’m just blown away,” stated Jason. “My latest release, The Song Lives On, is a project I’d always dreamed of recording. I wanted to go back to my roots…back to the church where I grew up singing. To see the songs I sang in a little country church be honored in this way is special. This album is something really dear to my heart. I am grateful to the three B’s — Bill Gaither, Barry Jennings and Bill Carter — for making this dream a reality for me.”

Crabb received the news while traveling back a college basketball game between the Mississippi State Bulldogs and the University of Kentucky Wildcats where he performed the national anthem for a packed house at the Humphrey Coliseum in Starkville, MS.

Many other noteworthy Dove nominees are found this year within the Homecoming family. In the category Song of the Year are “I’ve Been Here Before” by Ernie Haase & Signature Sound and “Please Forgive Me” by the Gaither Vocal Band. The GVB is nominated for Group of the Year, joining The Isaacs, who are also hopefuls for Artist of the Year.

Homecoming Friends Russ Taff and The Martins are competing for Inspirational Recorded Song of the Year, with “Love Is a Cross” and “I Surrender,” respectively.

Up for Southern Gospel Recorded Song of the Year are the Perrys, with “Celebrate Me Home”; The Crabb Family with “If There Ever Was a Time”; Ernie Haase & Signature Sound with “I’ve Been Here Before”; Gaither Vocal Band with “Please Forgive Me”; and John Hagee with “Victory in Jesus.”

The Isaacs show up again with a nomination for Bluegrass Recorded Song of the Year, for “Mama’s Teaching Angels How to Sing.” In the Country Recorded Song of the Year category, we find Doug Anderson, with “Dreamin’ Wide Awake”; Karen Peck & New River with “Good Things Are Happening”; Jeff & Sheri Easter with “I Get To”; Guy Penrod with “Pray About Everything”; and of course, Jason Crabb with “Why Me.”

Russ Taff shows up again, nominated for Traditional Gospel Recorded Song of the Year with “Here Comes Jesus.” Russ also gets a nod for Inspirational Album of the Year for his Faroe Islands album and joins Wes Hampton, nominated in the same category for A Man Like Me.

Competing with Jason Crabb for Southern Gospel Album of the Year are Karen Peck & New River with Reach Out; the Collingsworth Family with Part of the Family; the Bowling Family with Miracles & Memories; and John Hagee with A Lifetime of Music. Rambo McGuire garners a nomination for Grassroots Rambos in the Bluegrass Album of the Year category. Vying for Country Album of the Year are Marshall Hall’s Brighter One, Doug Anderson’s Dreamin’ Wide Awake, Wilburn & Wilburn’s Family Ties, Crabb Revival’s Going Places and The Martins’ New Day.