Stories From Our Readers

TAGS
May/Jun 2013   Grieving
It has taken me several months to write this letter, but I feel that I might help someone who is grieving over a loved one who has gone home to be with the Lord. My wife, Aliece, and I had tickets for Gaither Fest at Myrtle Beach in October 2012. We had decided to attend the concert because I felt this would be the last chance I would have to see a Gaither concert; I have terminal cancer.

While we were driving in South Carolina, my wife and I were talking about my cancer, and I told her that I had all the paperwork completed for when I died. She told me that she was going to die before me, and I said, “I don’t think so; you know I have the most aggressive cancer you can get.” She promptly said she was going to go before me, and she didn’t want to talk about it anymore. She had just been given a clean bill of health in August 2012 after having a complete physical.

We attended the Friday and Saturday night concerts, and in the 48 years we’d been married, I had never seen Aliece so happy and filled with the Holy Spirit as I did during the Saturday night show; we talked about it all the way back to the hotel.

The morning after we arrived home to Ohio from Myrtle Beach, Aliece suddenly had terrible stomach pains. I asked if she wanted to go to the hospital, and she said yes. I got her up, we took about three steps, and she collapsed in my arms. There were no vital signs. I gave her CPR and mouth-to- mouth resuscitation, but there was no response. I called EMS, who arrived in less than four minutes, but they could get no response either, and she was pronounced dead. She died from a blood clot in her leg from sitting so long in the car without getting out and walking around; the doctor said this is very common with people who travel.

This has been the hardest thing I have ever had to face in my life, even after being a police officer for 33 years and thinking I could handle anything. But I know that the Lord knows what is best for us, and I trust in Him totally.

Aliece bought the CD Giving Thanks at Gaither Fest, and I play it in the car every day to start my day; I believe the Lord knew I would need these songs. After Aliece died, I found this prayer written on the front page of her Bible. She wrote it in 1984 after her father died, and I had never seen it. She was also a very accomplished artist, and we super-imposed the prayer on several of her paintings. I have been very blessed by the Lord to have been married to such a beautiful woman, and I thank Him every day. May the Lord continue to bless you and your music ministry. 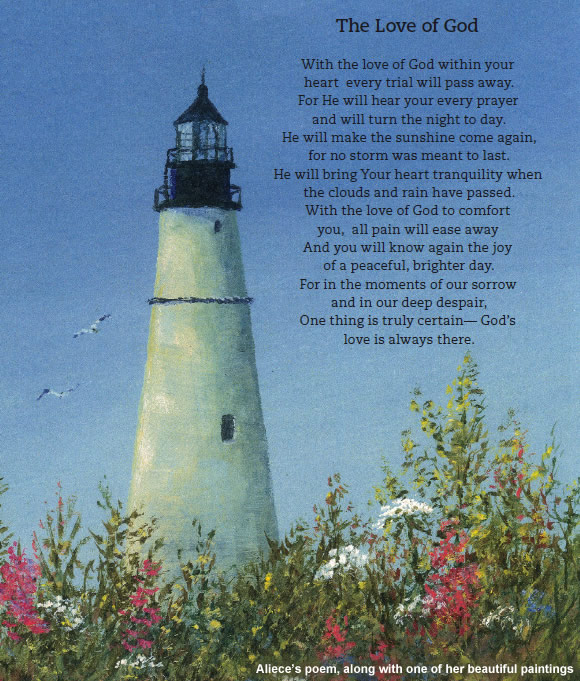