TAGS
Jan/Feb 2012   Forgiveness   Forgive
Why Godwink?
My mind drifts to when we were kids, sitting at the big table, looking up and seeing someone you loved — Mom, Dad or Grandpa — giving you a silent communication — a wink.

That’s how the word Godwink was born.

I believe Godwinks are one of the wonderful ways God communicates with us. Just like that wink from Dad, I think He sometimes uses Godwinks to reassure us that we’ve done the right thing — such as forgiving someone.

That’s what happened to John.

It was a time when John’s construction company was really flying; he had so much business he needed to hire someone to tend the books and the office while he was in the field working.

He decided to hire someone he’d known all his life. His cousin Jamie. She was going through a rough patch in her own life and needed the job.

At first everything seemed to be going well. Then he discovered that the $120,000 cash reserve he had in the bank had disappeared!

It didn’t take much research to determine that Jamie was having such a crisis, she was “borrowing” money by writing a series of $20,000 checks.

Within weeks, John lost everything.

“I lost my car, my home, everything,” says John.

The one thing he did have was hate.

“I hated that my own flesh and blood, whom I trusted, had betrayed me. I hated Jamie and I hated myself for letting it happen.”

John’s work ethic remained exemplary, and soon he was pulling himself back up, taking on multiple sales jobs which required no withholding taxes. By filing tax extensions for the next three years, he was able to pay back his debts and get back on track.

“I didn’t speak to Jamie all during that time, harboring resentment. What was I going to do — call the cops on my own family member?”

Three years passed and John’s dad died. At the funeral he spotted Jamie, avoided her; then, she came up to him with tears in her eyes.

He looked directly at the woman who betrayed him. He paused. His lips said, “I forgive you.”

Walking away John felt a still, small voice quicken within him. It said: “You haven’t forgiven her.”

Yes I did, he began to argue.

Months passed. John had no further contact with Jamie. Then, out of the blue, he received a phone call. It was his embezzler, Jamie, adding insult to injury.

Slamming the phone down in a burst of fury, he uttered words inappropriate for any company.

An hour later he began to soften, thinking about the difficulties she’d been through.

He didn’t have 600 dollars. But, he’d always followed his dad’s practice of stashing a few bucks here and there around the house, in pockets of coats and drawers. He gathered his hoard of tens and twenties and soon was standing at a Western Union window. He’d found not only 600 dollars, but also the 20 dollars to wire the money.

Should I really be helping someone who wronged me so badly? he asked himself.

“Yes.” It was the voice again…that small still voice.

Jamie, I forgive you, John said to himself, feeling a peace come over him.

His cell phone rang. He recognized the number; his accountant.

Oh, no. This was the call he’d been dreading…how much he owed in back taxes.

“Just give me the bad news, David,” he sighed into the phone.

“You won’t believe it,” said his accountant. “You’re due a refund!”

It was exactly 10 times what John had given his cousin in an act of forgiveness.

He knew he’d just received a powerful confirmation, directly from God. Through this remarkable Godwink he was being told, “Hey kid, I’m thinking of you right now. I’m proud of you.” 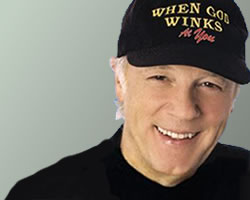