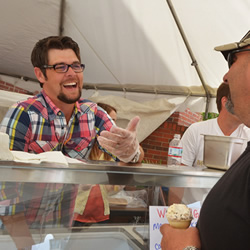 During the first day of the CMA Music Festival in downtown Nashville, Jason Crabb partnered with Denali Flavors, developers of the legendary Moose Tracks Ice Cream flavor, and Purity Dairies to participate in the 10,000 Scoop Challenge. Ten thousand scoops of Moose Tracks ice cream were given away at the First Baptist Church in Nashville, Tenn. to raise money for charity. Other "celebrity scoopers" with Jason included Scott Hamilton (Olympic Gold Medalist Figure Skater), Rhonda Vincent (award-winning bluegrass artist), The Roys and others. For every scoop of ice cream, Denali Flavors donated $1 to Rocketown, a teen center started 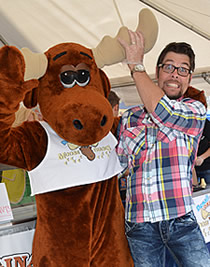 "We had a great time scooping ice cream," Jason Crabb said. "To be able to support Michael W. Smith and the work he does at Rocketown by giving away some free ice cream was a lot of fun! I was honored to be a part of the event today and I even ate some Moose Tracks myself!" (Pictured right: Jason hams it up with "Mike The Moose," the official Moose Tracks mascot) 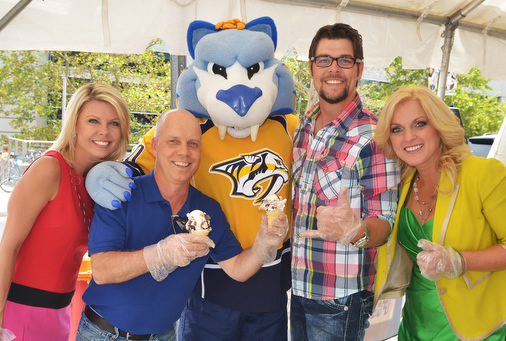 Check out the video:

(Photos by: The Judy Nelon Group)