Lynda Randle and BeBe Winans Discuss "The Whitney I Knew"

TAGS
Lynda Randle   Sept / Oct 2012   Whitney Houston   BeBe Winans
In his new book, The Whitney I Knew (Worthy), BeBe Winans (with Timothy Willard) tells the story of his friendship with the troubled superstar Whitney Houston and his grief over her sudden passing in February. Here, his longtime friend Lynda Randle chats with BeBe about the story’s powerful impact.


LYNDA RANDLE: BeBe, this book is absolutely incredible! I was so blessed in reading it, and I know readers will be blessed as well. I want to talk about the regular, everyday Whitney that you knew. I know you miss her beyond words. Tell us what you miss the most about her.

BEBE WINANS: I think what stings most of all is knowing that you can’t speak to or touch that person anymore. That brings a finality . . . the realization that we had said our final goodbye.

LYNDA: That’s powerful. I so appreciate your honesty in this book. I love when you said that there are some things that only you, God, Whitney and CeCe know, and you intend to keep it that way!

BEBE: I think it is important in any strong relationship to know that you have a sanctuary. When a person is a sanctuary, I can say and be whatever I need to, and know that it’s safe with them. At her homegoing service, I watched the same people who threw darts at her and pushed her 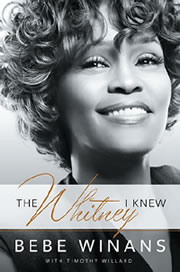 aside, now celebrating her. That’s the reality, not just of this world, but of this business. When I saw that, it confirmed a lesson learned — that only what you do for Christ will last.

I met a young lady in the doctor’s office, and she thanked me for what I said at the funeral. She had never met Whitney, but some of her life mirrored Whitney’s life. She was thanking me because what I said helped her feel a little closer to Whitney. That’s why I titled the book, The Whitney I Knew. I want people to know her as I knew her, because it dispels the myths.

LYNDA: It sounds like through this tragic loss, you kind of became a “voice” for Whitney, your goal being to stamp out the lies and rumors that plagued her  —not only in life, but now even in death. As I read your accounts of all the betrayals and disloyalties, I could feel your pain, your anguish and your courageous effort to hush the lies! Whitney’s gift to us was definitely her voice and her spirit. Can it be said that this book about her is your gift to the world on her behalf?

BEBE: I think that can be said. I was attracted to the unbelievable talent, but what I was blessed most to experience was the humanity of Whitney Houston. And so, it’s my way of paying tribute to that part. I welcome the task of telling the story of the 20-plus years that we spent as friends.

After doing an interview with Rolling Stone Magazine — they had just received an advance copy of the book — I looked at this beautiful book and wished only that instead of the title being The Whitney I Knew, it would read "The Whitney I Know." She was one of my favorite people on earth.

LYNDA: I could totally tell, BeBe. And I love the way you incorporated scripture and weren’t afraid to talk about the Bible. I appreciate that. Whitney said of herself, “I’m either my best friend or my worst enemy,” which reminds me of Paul in Romans 7—“The good that I want to do, I don’t do.” I love your quote that says, “Isn’t it hypocritical of us to drag others down for their weaknesses, just because they’re not ours?” That’s powerful — but for God’s grace, where would you or I be standing?

BEBE: One of the things I hope will be accomplished as people read this book is that they see the need for more compassion. I hope it opens our eyes to the importance of loving one another and having compassion for each other. My prayer truly is that people get to experience firsthand the up-close-and-personal Whitney that I long for everyone to know.

LYNDA: You accomplished that, BeBe. This book moved me. I laughed, I cried — so many emotions. But the line that moved me the most was when you talked about Whitney loving to sing the song, “Jesus Loves Me.” And you believe that maybe, in the final moments of her life, she may have sung this line once more, in her private time with Jesus … “I am weak but He is strong” … her final worship between God and herself. Wow!

BEBE: And you know why I could say that? Because she loved to sing — that’s all she did when she was by herself. Just like me. She loved to sing, paid or unpaid, so I know she was singing. That’s number one. And number two — she always had thanksgiving on her lips. Whitney was known for singing songs that had nothing to do with God, but she would always manage somehow to say, “Thank you Lord” in the song!

LYNDA: I know you said in the book she would “slip those words in there.”

BEBE: It was totally in her — that’s the Whitney I knew!