Remembering JAKE HESS ...Nothing But Fine

TAGS
Jake Hess   Mar/Apr 2004
JAKE HESS — pioneer, minister, showman... Nothing but fine. Everybody loved Jake, and Jake loved everybody. A simple way to sum up 76 years of living, but a fitting eulogy for the extraordinary man Bill Gaither described as “Gospel music’s finest gentleman.”

Morningside Baptist Church in Columbus, Ga., was filled to capacity Jan. 7 as family, friends and fans gathered to say goodbye to Jake Hess. As mourners solemnly filed in and took their seats, they opened the funeral program to see Jake’s familiar face smiling up at them, eyes twinkling and trademark wig in place. Family members were lovingly acknowledged as well as the Homecoming Friends, his “family on the road for the last ten years.” A brief paragraph on the back cover also offered warm thanks to “those who have been in the audience for the 60 years that made up the musical journey of this gospel singer’s life,” adding, “You have all been a blessing to our family.”

Morningside Baptist’s Pastor Bill Shorey was first to speak. He welcomed everyone and offered an opening prayer before turning the service over to the Homecoming choir, who sang the stirring gospel standard “Joy Comes In The Morning.”

A distinguished, white-haired man with a cane, Evangelist Michael Guido, told a story about being called to Jake’s home in Atlanta in 1957. In slow, measured tones, he spoke of Jake agonizing over a business opportunity tempting him with fortune and fame. Should he take the offer? To every point Jake raised, Rev. Guido gave the exact same answer: “Seek ye first the kingdom of God and His righteousness, and all these things shall be added unto you.” After a long night of soul-searching, at 3 in the morning, the two dropped to their knees. “His face bathed in tears and the glory of heaven beaming from his eyes, Jake said, ‘Brother Mike, I’m going to seek God and His righteousness and His kingdom.’ From that day on, Jake couldn’t be bought, compromised or turned away. He gave up everything for Jesus, and he wouldn’t give up Jesus for anything.”

Rev. Guido concluded by saying, with great emotion, “I’ve heard people saying, ‘Poor Jake,’ but that’s just not true. I know he is richer now than he’s ever been. He’s walking down streets of gold with Joyce, singing with the heavenly choir and waiting to join us all in that great meeting in the air. Oh, he’s having a wonderful time!” He paused a moment to collect himself and then said with a smile, “Aren’t you glad you’re a Christian?”

Jake’s granddaughter Emily Trotter spoke next. “When I think of Jake Hess, I don’t think of the number of Grammys he won or that he was Elvis’ favorite singer,” she said. “I think of the father, grandfather and great-grandfather we knew. The man who loved loud suits, cracking jokes and the Atlanta Braves. A man who could talk on the phone for hours, and was so pleased when cell phones were invented!” 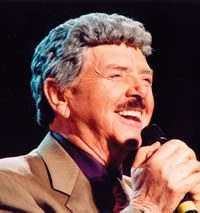 The crowd laughed fondly as she continued. “He never met a stranger. More than anything, he loved the sound of four male voices blending in perfect harmony. And he always said he slept best on a bus.” Emily concluded with, “We are all proud of Jake Hess’ many accomplishments, but to us, he was just our Daddy, confidante and best friend. And we miss him. But he’s not gone forever, only for a summer. He’s just out on a trip — singing.”

Bill Gaither introduced a video tribute, “The Jake We All Knew.” As he looked out at the congregation, he noticed Emily Trotter holding her new son, Jake’s only great-grandchild. In a sweetly spontaneous moment, Bill began to softly sing the verse of a song he and Gloria had written years ago for their own son, “How sweet to hold our newborn baby, and feel the pride and joy he gives…” As he reached the chorus, the Homecoming choir stood to their feet and joined Bill in an emotional version of the Gaither classic, “Because He Lives.”

As the last notes of the song faded away, a black & white image of a young Jake Hess appeared on a screen at the front and the crowd burst into applause. Jake was surrounded by the Statesmen, singing strong and clear in his inimitable style, “Prayer is the key to heaven, but faith unlocks the door.” The next few clips contained Homecoming concert footage — Jake trading quips with Bill about his health and hairpieces, purposely flubbing the lines of a song to the uproarious delight of the audience, and laughing his head off at the antics of a bewigged Mark Lowry. The screen was filled with his unforgettable presence, as picture after picture and song after song reminded everyone once again just why we loved him so much. The video ended with the sound of Jake’s voice singing the beautifully appropriate line, “I have met the Master, and now I belong to Him.”

Pastor Shorey read a brief passage of Scripture, then spoke of Jake’s attitude toward his career and his family, noting the traveling life of a gospel singer. “There is a difference between being ‘away’ and being ‘absent.’ Jake was never absent from his family. When he was home, he spent every minute he could with them.” The pastor concluded by proudly sharing how each of Jake’s children — Chris, Becky and Jake Jr. — had followed in their father’s spiritual footsteps. 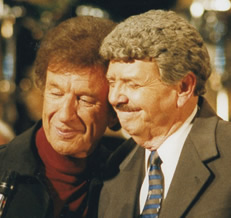 Bill Gaither and Jake Hess were friends for 55 years. As he told the story of this rare relationship, of the boyhood hero who became a lifelong friend, his love and grief were obvious to all. “Gloria has said for the past 15 years, ‘I hate to see the day come when the phone rings and the voice on the other end says, ‘Jake’s gone.’ Well, it happened this weekend. Just because we were expecting it doesn’t make it any easier.”

The Vocal Band sang an inspired version of the anthem, “Where No One Stands Alone,” and then Gloria Gaither made her way to the front. 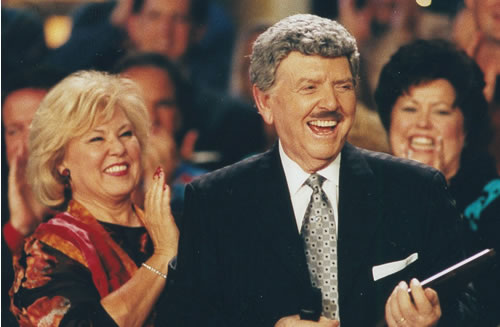 “I heard about an old preacher,” she began, “who once said, ‘It doesn’t matter so much what we did in our life, whether we were famous or unknown, whether we succeeded a lot, or failed a lot—we all make the crossing at the same place.’” Gloria went on to say that when she heard that statement, it reminded her of something her mother had always done. Gloria’s mother was in the habit of leaving notes around for her children. She left little messages everywhere, taped to the steering wheel, tacked on the front door, even stuck on a hedge in Disneyland. “Since we all make the crossing at the same place,” Gloria said, “I wonder if there will be other people crossing over who might leave notes, besides my mother.” Referring to some of the heroes of faith that have gone before us, including Howard and Vestal Goodman, Gloria described an entrance to heaven strewn with notes left for those of us yet to come. “I’ll look for Jake’s note on the bright side of the path,” Gloria said, smiling affectionately. “And when I find it, it’ll say, “I’m nothin’ but fine — and this time I’m not lying!”

Jake’s funeral ended with all of his Homecoming “family” saying their goodbyes the best way they knew how — with song after song of the music Jake loved so well. Jesse Dixon sang “What Are They Doing In Heaven Today?” That was followed by the whole gang on “O Come Angel Band,” with Ben Speer, Guy Penrod, Johnny Minnick and David Phelps trading solos. Karen Peck’s sweet voice led on “I Will Meet You In The Morning Over There,” and the closing song was a triumphant “What A Day That Will Be.” Their voices blending seamlessly, the Homecoming Friends sang side by side, swaying with eyes closed as tears coursed down their cheeks, or standing up to belt out a chorus. It was such a wonderful time—the only thing missing was Jake. 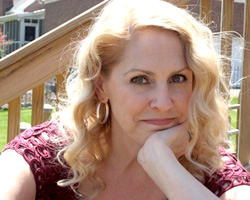