The Misadventures of Mark Lowry: Art Who?

TAGS
Mark Lowry   The Misadventures of Mark Lowry   Mar/Apr 2004
Art who?
Class clown Mark Lowry braves challenges put to him by Homecoming readers. But this time, the challenge was given to him by Gloria Gaither: Write an article about art!

So, Gloria Gaither called me the other day and told me that she and Bill were going to be in town. Bill had to be in the studio and she wanted to know if I would drive her around to some of her meetings.

Hello? Ever heard of Avis?

Of course, being the humble, servant-type that I am, I never mentioned the fact that she’s rich enough to buy Avis Rent-A-Car and, in so doing, she could leave me the heck alone. But, I cancelled my life for the day and told her I would be more than happy to drive her around town.

Actually, I have no life, and she promised to buy breakfast so I said, “Okay.”

I met her at Noshville (a deli in Nashville). She was having breakfast with Peggy Benson — whom I once witnessed at a party sing to Jessy Dixon, “I’m Just A Girl Who Can’t Say No” while he sat in a chair and she slithered around him. It was one of the funniest things I’ve ever seen, but I hope I never have to see it again.

But that’s another story.

I sat down and ordered a few eggs, bacon, hash browns and coffee while Gloria caught up with her longtime friend, Peggy. Once I finished eating and Gloria and Peggy finished gossiping (or should I say “sharing,” so they can pray more intelligently), we headed over to Gloria’s first meeting with the ever-so-somber editor-in-chief of this illustrious magazine, Roberta Croteau.

Roberta informed me that this issue of Homecoming Magazine was to be about art. Art? Art who? I don't know Art. I told her I would just skip this issue and create some space for someone who did know something about art.

I’m not a big fan of art, especially fine art. I love ugly art. It’s just the good stuff I’m not crazy about. Besides, it costs too much.

Gloria suggested I write about the Pre-Raphaelites. I asked her if they had ever backed-up Elvis. Then, she must have gotten something in her eyes because they rolled back in her head.

My dad used to say the same thing about music: “I don’t know if it’s good or bad, but I know what I like.”

I told dad: “You really like what you know.”

And the same applies here. I like what I know. And I know nothing. Which is probably why I like nothing about art. Except what I like. And that’s nothing.

I have visited art museums (usually at the urging of friends who wanted to visit them) and I have been quite bored. I like it for a few seconds, but I have no desire to stand and stare at a painting. You stare and stare and stare and nothing changes. It’s still an ugly Picasso. The man needed glasses. The proper placement of anatomy was not his strong suit.

The thing I really want to know is this: who decides what is bad, good or great art? Where is the board of directors who pass this judgment? What makes their opinion any better than mine? What makes one painting worthless and another merit millions?

If you’re talking about music, I have a better gauge on which to judge. If it’s out of tune, it’s bad. If the lyric isn’t saying anything new, it’s bad. If you’re trying to cram too many words into the meter of the music, it’s bad. If it wastes three minutes of your life listening to it, it’s bad.

But, what makes a painting spectacular?

Someone said, the best art comes from the very heart and soul of the artist. I have no idea who said that, but I’m sure that someone, somewhere, sometime has said that. And, if they didn’t—well, they should have.

When I was living in Atlanta, I had a big wall in my living room where I wanted to hang some art. I knew I would need huge pieces. And since I didn’t have any money to purchase something that would stop people in their tracks when they entered my home, I decided to paint something myself.

I visited the local arts and crafts center and purchased two of the largest canvases they had. I didn’t buy any paintbrushes because this was going to be “modern art” (which doesn’t require talent). If I laid the canvases in the yard and threw paint on them, it would only take a few seconds and everyone would think they were Picassos, because modern art needs no form, rhyme or reason.

Anyway, most “artists” will tell you they are trying to “say” something through their art that really matters to them. But, in my case, the only thing that mattered to me was putting something on this huge, blank wall that wouldn’t cost much and would remove the blankness of the wall.

My mother came to visit. She took a picture of my two paintings and showed them to an “art connoisseur” at her church. 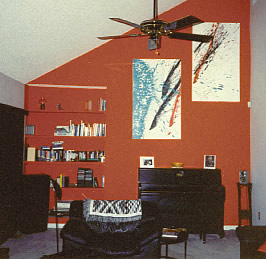 This lady raved about my paintings. She wanted to know where I bought them. She began to describe what she “saw” in them. I don’t think my mother had the heart to tell her how they were created.

Which, I guess, would make this article a work of art because I’ve filled my space. Maybe. Maybe not. I don’t know anything about art. Read the other "Misadventures of Mark" articles:
Mark Goes to First Grade!
Mark Give Janet Paschal A Whole New Look!
Mark Helps With Vestal’s Legendary Coconut Cake
Mark's Day at Krispy Kreme!
Mark Survives A Storm!
Mark Goes Fishing to Uncover a Secret!
Mark Shares About His Cool Grandparents! Click here to see more articles featuring Homecoming artist Mark Lowry.