TAGS
Jul/Aug 2011
Our parents worked full time, so when they were home they stayed busy. Daddy never let an engine stutter, a tool dull or an appliance operate inefficiently. Mom maintained our household and cooked two meals a day. Because of their busyness, the kitchen table was about the only place where everyone was in the same room at the same time, except for summer thunderstorms.

Our family practiced great respect for lightning and thunder. There was an unspoken rule that we all gather in the living room and speak quietly until the storm passed. These were some of my favorite times because it meant that work and chores and church did not take us in different directions. We simply sat in the room together. It felt safe. We did not know fear as long as Daddy was there. He was stronger and smarter than anyone I knew, and he could construct, repair or unravel anything.

Mom and Dad were very strict. While we didn’t appreciate it at the time, in hindsight both Kay and I are grateful for it. One of the things for which we were most often in trouble was giggling in bed. Daddy always issued a warning, which only intensified our goofi ness, until we heard his feet hit the floor. At that point, we knew we had crossed the line. To this day, Kay and I can be uncontrollably giggly and goofy in the most inappropriate situations. We try to avoid each other at weddings and funerals.

When I was 4, our local Ford dealership held a drawing for a black and white, 19-inch portable television. Unbelievably, our dad won it. He put it on a rolling cart in the living room and our family stumbled into the golden age of television. We loved Red Skelton and Lucille Ball, Dracula and Lost In Space. On Sunday mornings, we tuned in to watch Oral Roberts pray for the sick, and more than once, I placed my hand on the convex screen as a point of contact.

Our parents had a daughter between Kay and me, Dianne. She died of pneumonia at 6 months old. For some time afterward, Kay would cry and say, “I want to see Di.” Several times, my parents took her to see our cousin, Nancy, who was about Dianne’s age and that would assuage her for a while. In her Sunday School class recently, Kay spoke of Mary Magdalene’s visit to Jesus’ tomb and how, when He called her name, Mary knew His voice. Kay said that she believes when she gets to heaven, she will hear a voice call her name, and she will instantly recognize it as belonging to her “Di,” her sweet Dianne. I believe it, too.

When we were in junior high, Kay and I formed a trio with our cousin called the Gospel Classics. (OK, I said it.) Another cousin played the drums, and a friend played bass. Our parents paid for us to record an album. They purchased and renovated an old bus to make traveling easier. When a man in our hometown painted our name on the side, we thought we were the next big thing. Only in adulthood did I realize the sacrifices both parents made: leaving home on Fridays, returning just in time to be back at work on Monday mornings. I took so much for granted that it shames me. They never mentioned their lost weekends or their financial sacrifices. It just seemed that they dreamed with us, for us, and they never computed our indebtedness.

They bore the cost of our wonder years. They spent their youth on our childhoods. They took responsibility for who we were and who we would become. But the driving force that underscored all of their actions and their responses was never more complicated than love. The lone dynamic that held no wonder for us back then was just how much we were loved.
And that was wonder-full. 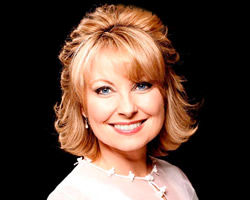 Janet Paschal is one of Homecoming’s most beloved artists as well as a prolific writer and profound thinker who finds wonder and faith in the day to day of life.